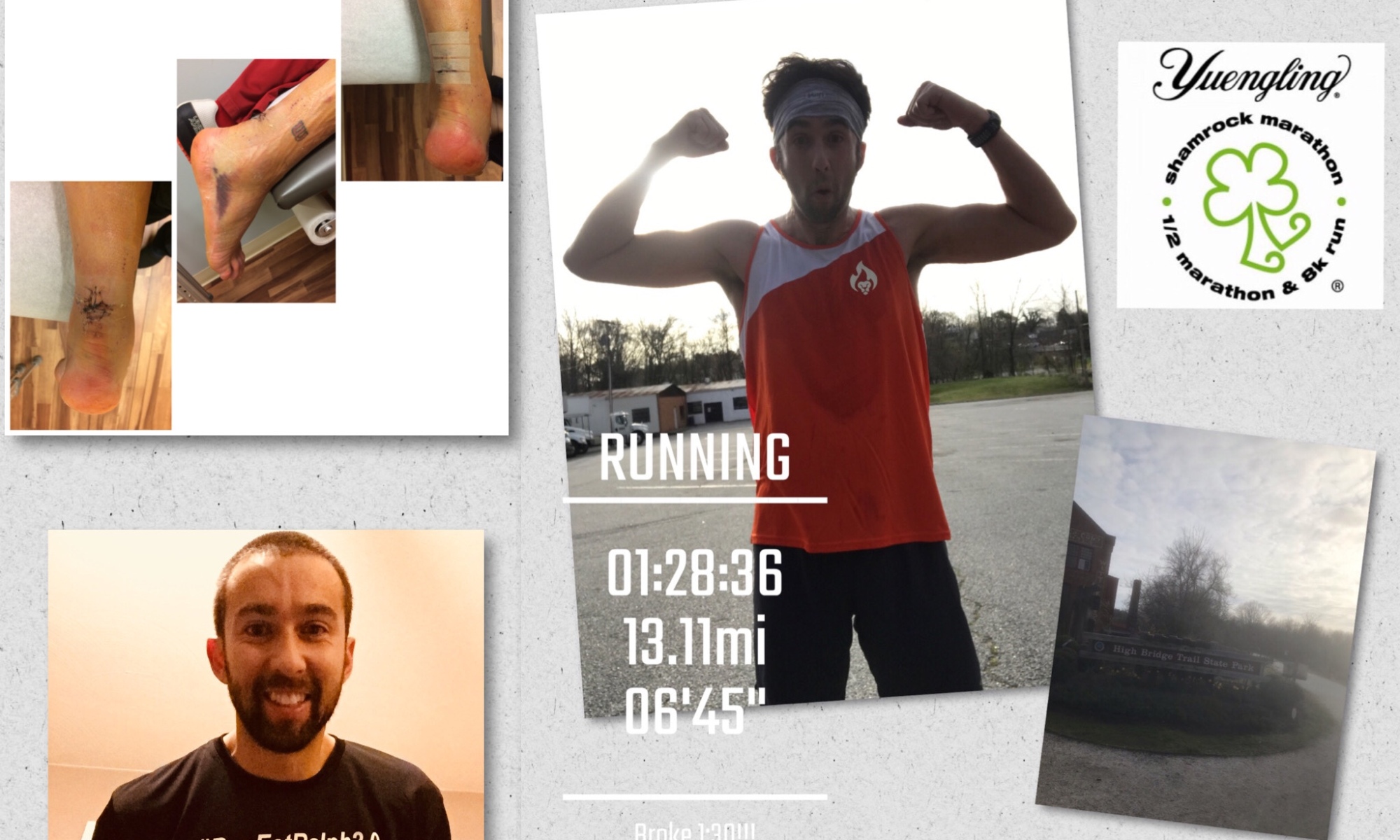 Disclaimer: I received a free entry to the Shamrock Dolphin Challenge (virtual) as part of being a BibRave Pro. Learn more about becoming a BibRave Pro (ambassador), and check out BibRave.com to review find and write race reviews!

What day is it? Oh, it’s Sunday. That’s right. I’m glad technology is tracking that sort of stuff, cause we’re losing most of our reasons to care about such things. I did go to church on YouTube this morning, so we’re adapting where we can to the current situation.

One other way that we’ve had to adapt as runners is by coming to the realization that we aren’t racing anymore for a while. I had big plans for Shamrock, but of course plans are changing. I decided to do the Dolphin Challenge virtually cause I DEFINITELY want to wear those awesome race shirts and I felt like I better earn them. 🙂 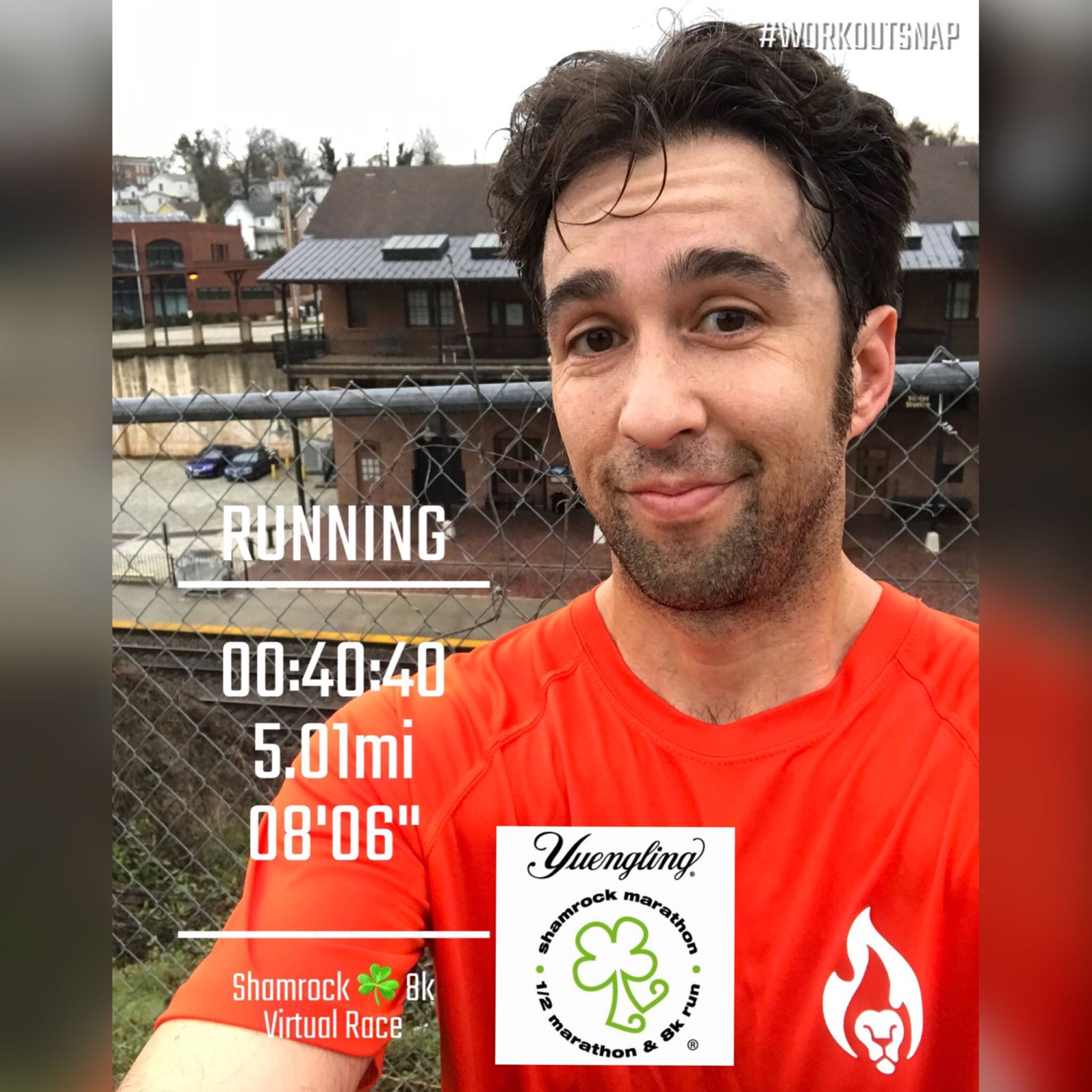 Step 2: The half marathon. I was REALLY looking forward to a fast course, a great crowd and PLENTY of motivation to try to break a 1:30 half marathon for the first time ever. When I found out the race was canceled, I decided I’d go for it anyway. Originally, I was going to have some help. Some great friends were willing to run some with me, pace me on their bikes, carry drinks, etc. For that I’m thankful, but I decided to “Rocky 4” it alone. For those of you that have NO idea of what I’m talking about, I mean that I wanted to go it alone. I wanted no distractions and to rely on no one and nothing but myself out there.

I decided to go out to Farmville and run the High Bridge Half Marathon course. I’d come close there (1:30:07), so it made sense to try there again. It’s flat and has packed gravel, which I LOVE. The weather was JUST right (I was cold to start in a tank top and shorts, just like I like), I got a good night’s sleep and I woke up early enough to eat a peanut butter and honey sandwich. I started out the morning with pre-race butterflies, but I calmed down on the 1 hour drive. I hit a porta-potty BEFORE I started running, even though I’d already gone at home. Damn tummy.

A 1:30 half marathon requires a 6:50/mile pace. That’s an intimidating number to me when I think about trying to hold it for 13.1 miles. The thought of “banking” time and running much faster than that made me want to hurl, so I decided I’d try to just stay steady from the start. I think I did a pretty good job of that. 🙂

It’s amazing how many thoughts can get into a person’s head during a distance race. Early in the run, I really thought I had no shot. I could feel myself tensing up. My breathing was unnecessarily labored. It was my brain, not my body. I was able to calm myself down by reminding myself that I’d been working for months for that moment and I was ready for it.

Maybe it’s crazy to say but by around mile 9, I knew I had it. I ran with confidence. Nothing short of an injury was going to stop me. I envisioned myself cruising in during the final mile and yelling out in excitement when I finally saw that 13.1 on my watch. There were no spectators. There was no finish line. I didn’t need them.

I decided that I wasn’t going to leave anything to chance. I planned to not slow down even a little bit. I ended up having the guts to kick it another notch just before the last mile. 1;30 was in the bag but I felt good enough to try to break 1:29, so I did. When I finally saw 13.1 on my watch, I screamed out with excitement. Nobody was around to hear it anyway.

I have to credit Coach Craig for this training cycle. She knew well how and when to push me and when I needed a break. She got me ready for this. Thanks, Coach.

This was my first PR since November of 2017. Honestly, I thought that one might be my last. I tore my achilles the following month (most of you know that cause I wouldn’t shut up about it haha). I worked hard to get back from that (with a lot of help) and I certainly showed signs that I was back, but couldn’t quite hit that next level. I thought maybe that was all that I had left. Now I know with certainty that my best days are not behind me!

All PRs feel amazing, no doubt about that. I guess this one feels just a little bit EXTRA amazing. It was only 2 years, 3 months, and 7 days in the making.